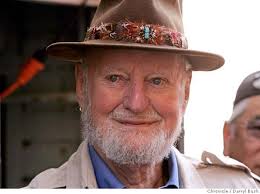 Lawrence Ferlinghetti was born in 1919 in New York, but he is mostly associated with San Francisco as one of the main poets of the ‘Beat’ movement. In 1953, he co-founded a publishing house and bookshop called City Lights, which specialised in Beat poetry and became a meeting place for poets and artists.
His first book was published in 1955; he has since written 17 more books of poetry, drama, prose and translation. He often writes about politics and social issues, as seen in Two Scavengers in a Truck, Two Beautiful People in a Mercedes.
He was named as San Francisco's first Poet Laureate in 1998.
Rate:
0
No votes yet