Analysing a Moving Image
Quick revise
Screen Works
Some exam boards require you to produce a piece of writing inspired by a moving image. This could be a film review of a Hollywood blockbuster or a comparison of a Shakespeare play or other drama text to a film adaptation. You could be asked to discuss a film version of a popular piece of literature as a way of showing your understanding of the text. Some exam boards also ask you to look at a range of media texts such as film, TV, music videos and advertisements. In order to be able to write about this you need to have a basic understanding of moving image and media conventions.

If you were studying an extract from a piece of prose or a poem, you would comment on the writer’s choice of language and the techniques that they use to get their message across.
When looking at a moving image, you need to comment on how the director creates atmosphere and reveals information about genre and characters’ thoughts and feelings. In order to comment on how meaning has been portrayed you need to understand what is meant by mise-en-scene. Mise-en-scene is a French term that literally means ‘put on stage’ – when studying a moving image it refers to everything that you see in the frame or scene:
• the appearance of the characters – their costumes, make-up, hairstyle, facial expressions, body language, etc.
• the set – furniture, props, scenery
• the positioning of characters and objects
• lighting and colour
• sound
• camera angles and shots. 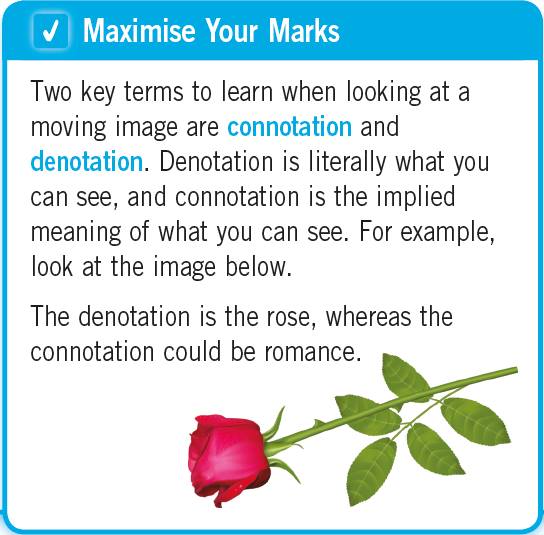 Sights and Sounds of Moving Images
When studying a moving image you need to be able to comment on the use of sound. This includes dialogue – the words spoken and the way that they are spoken – and sound effects. These can include diegetic sounds, which are sounds that are part of the action, for example the wind howling or birds tweeting, and non-diegetic sounds, which are added afterwards, such as voice overs and atmospheric music. In addition to the camera angles, shots and movements it is also important to comment on lighting and colour as these can also be powerful tools. Colour, for example, can range from monochrome (black and white) to sepia, to deliberate colour effects to create impact. The film Schindler’s List, for example, is shot mostly in monochrome. However, to create impact, colour is added to key sections. A little girl is seen wearing a red coat – the red contrasts with the black and white and the connotation of this is powerful as it implies danger and bloodshed.
Camera Angles and Movements
There are lots of different ways in which the camera can be moved. This is used to create specific effects and alter the way the audience responds to the image. Look at these examples:
• Pan – this is a slow movement which scans a scene horizontally. The camera is often placed on a tripod, which acts as a stationary point and then follows the object across the scene.
• Tilt – this is a movement which scans vertically.
• Dolly – this is sometimes called a tracking shot: the camera is placed on a moving vehicle (the dolly) and follows a moving figure or object.
• Crane – this provides a swooping action as the camera is placed on the end of a platform or jib. These are perfect for action scenes where a lot of swift movement is required.
• Zoom – this mechanical lens allows the camera to move close to or away from the object/action without moving itself.
• Aerial – this is an exciting shot usually taken from a helicopter. These shots are often used at the beginning of films to establish and set the scene. They can create a sense of drama and exhilaration.
• Hand held – this was first used effectively during the Second World War by news reporters and then later adapted for documentary producing a ‘fly on the wall effect’. Hand-held camera actions are sometimes jerky and give a realistic effect. It was this technique that made films like Blair Witch Project a huge success.