Character & Audience
Quick revise
Character
Stage directions reveal key information not only about setting, but also about character. For example, in the stage directions in An Inspector Calls, the writer, in giving a direction about the lighting, also informs us about the key character. When the Inspector arrives the lighting should become ‘brighter and harder’.
This is an example of Priestley’s stagecraft. It is a dramatic device used to show the importance of the Inspector – he enlightens the characters and the audience about what has been going on in the characters’ lives.
Stage directions can also be found before the characters’ dialogue. These provide important instructions about how words should be spoken and what paralinguistic features should be used to convey emotion. For example, the stage directions for the Inspector state that the character needs to create:
…an impression of massiveness, solidity and purposefulness... He speaks carefully, weightily, and has a disconcerting habit of looking hard at the person he addresses before actually speaking.
This information is clearly important for the person playing the part of the Inspector but when you are studying the text, it is as important as the words that the Inspector utters. It suggests a lot about the character. It is this kind of analysis that will be the focus of your assignment.
Reading Between the Lines
In addition to listening to what is being said and observing what is happening on stage, it is also important to think about the underlying messages and themes that are happening within the play. This is known as the subtext. In An Inspector Calls the Inspector is used not only as a dramatic device but also as a tool to highlight the playwright’s views and beliefs. In one of his most important speeches in the play the Inspector tells the family and the audience:
We don’t live alone. We are members of one body. We are responsible for each other. And I tell you that the time will soon come when, if men will not learn that lesson, then they will be taught it in fire and blood and anguish. Good night. (Act three)
This quotation, taken from the Inspector’s final lines, is full of rhetorical devices that attempt to persuade the audience and the characters that it is time to realise that their actions have consequences. It also effectively conveys Priestley’s socialist message. In addition, when you think about the subtext of this quotation in the context of both the time when the play is set and the time when it was first performed, the promise of ‘fire, blood and anguish’ is all the more chilling. The 1946 audience had just emerged from the Second World War and would have been conscious of the fact that the play is set only two years before the outbreak of the First World War. 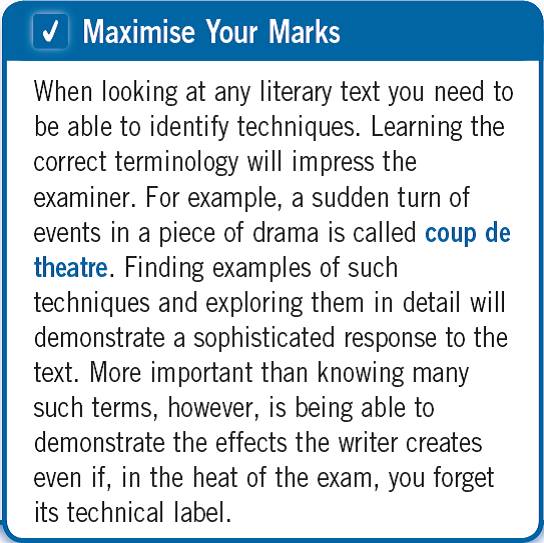 Dramatic Irony
When the audience knows more than the characters this is called dramatic irony. This is a technique that many writers use as it helps highlight key messages and involve the audience. How is the quotation below, taken from An Inspector Calls, an example of dramatic irony?
A friend of mine went over this new liner last week – the Titanic – she sails next week – forty-six thousand eight hundred tons – forty-six thousand eight hundred tons – New York in five days – and every luxury – and unsinkable, absolutely unsinkable. (Act one)
Birling is talking to Gerald and Eric. The play is set in 1912 but was first performed in 1946. The audience watching the play – both then and now – would know that the Titanic did in fact sink.