The video and text below explains the structure and functions of the heart. 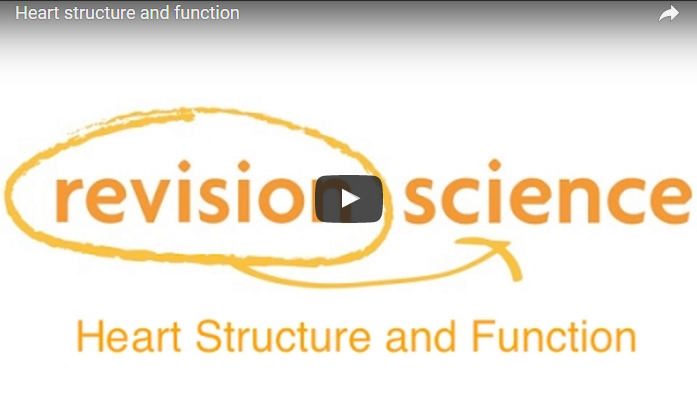 The heart consists of a range of tissues. The most important one is cardiac muscle. The cells have the ability to contract and relax through the complete life of the person, without ever becoming fatigued. Each cardiac muscle cell is myogenic. This means it has its own inherent rhythm. Below are diagrams of the heart and its position in the circulatory system.

• The right atrium links to the right ventricle by the tricuspid valve. This valve prevents backflow of the blood into the atrium above, when the ventricle contracts.
• The left atrium links to the left ventricle by the bicuspid valve (mitral valve). This also prevents backflow of the blood into the atrium above.
• The chordae tendonae attach each ventricle to its atrioventricular valve. Contractions of the ventricles have a tendency to force these valves up into the atria. Backflow of blood would be dangerous, so the chordae tendonae hold each valve firmly to prevent this from occurring.
• Semi-lunar (pocket) valves are found in the blood vessels leaving the heart (pulmonary artery and aorta). They only allow exit of blood from the heart through these vessels following ventricular contractions. Elastic recoil of these arteries and relaxation of the ventricles closes each semi-lunar valve.
• Ventricles have thicker muscular walls than atria. When each atrium contracts it only needs to propel the blood a short distance into each ventricle.
• The left ventricle has even thicker muscular walls than the right ventricle. The left ventricle needs a more powerful contraction to propel blood to the systemic circulation (all of the body apart from the lungs). The right ventricle propels blood to the nearby lungs. The contraction does not need to be so powerful.

If blood moved in the wrong direction, then transport of important substances would be impeded.

Cardiac cycle
Blood must continuously be moved around the body, collecting and supplying vital substances to cells as well as removing waste from them. The heart acts as a pump using a combination of systole (contractions) and diastole (relaxation) of the chambers. The cycle takes place in the following sequence. 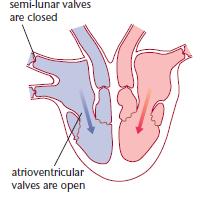 Stage 2 - Ventricular systole, atrial diastole - Both atria then relax. Both ventricles contract simultaneously. This results in higher pressure in the ventricles compared to the atria above. The difference in pressure closes each atrioventricular valve. This prevents backflow of blood into each atrium. Higher pressure in the ventricles compared to the aorta and pulmonary artery opens the semi-lunar valves and blood is ejected into these arteries. So blood flows through the systemic circulatory system via the aorta and vena cava and through the lungs via the pulmonary vessels. 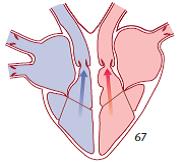 Stage 3 - Ventricular diastole, atrial diastole -  Immediately following ventricular systole, both ventricles and atria relax for a short time. Higher pressure in the aorta and pulmonary artery than in the ventricles closes the semi-lunar valves. This prevents the backflow of blood. Higher pressure in the vena cava and pulmonary vein than in the atria results in the refilling of the atria. 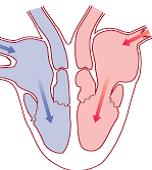 The cycle is now complete.
Returning to Stage 1, the cycle begins again. The hormone adrenaline increases the heart rate still further. Even your examinations may increase your heart rate.

The whole sequence above is one cardiac cycle or heartbeat and it takes less than one second. The number of heartbeats per minute varies to suit the activity of an organism. Vigorous exercise is accompanied by an increase in heart rate to allow faster collection, supply and removal of substances because of enhanced blood flow. Conversely during sleep, at minimum metabolic rate, heart rate is correspondingly low because of minimum requirements by the cells.

• The heart control centre in the brain is in the medulla oblongata.
• The sympathetic nerve stimulates an increase in heart rate.
• The vagus nerve stimulates a decrease in heart rate.
• These nerves link to a pacemaker structure in the wall of the right atrium, the sinoatrial node (SAN).
• A wave of electrical excitation moves across both atria.
• They respond by contracting (the right one slightly before the left).
• The wave of electrical activity reaches a second pacemaker, the atrioventricular node (AVN), which conducts the electrical activity through the Purkinje fibres. - All of the Purkinje fibres together are known as the Bundle of His.
• These Purkinje fibres pass through the septum of the heart deep into the walls of the left and right ventricles.
• The ventricle walls begin to contract from the apex (base) upwards.
• This ensures that blood is ejected efficiently from the ventricles. 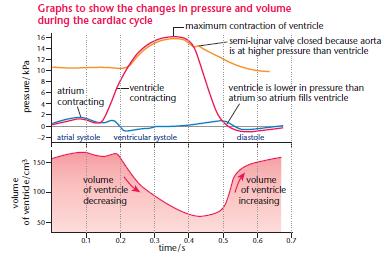 This is one of the examiners’ favourite ways to test heart related concepts. Look at the peak of the ventricular contraction. It coincides with the trough in the ventricular volume. This is not surprising, because as the ventriclecontracts it empties! Use the data of higher pressure in one part and lower in another to explain:
(a) movement of blood from one area to another
(b) the closing of valves.
PROGRESS CHECK
The medulla oblongata can increase the heart rate. The statements below include all of the events which take place, but in the wrong order. Write them out in the correct sequence.
A this ensures that blood is ejected efficiently from the ventricles
B the wave of electrical activity reaches the atrioventricular node (AVN) which
conducts the electrical activity through the Purkinje fibres
C a wave of electrical excitation moves across both atria
D the sympathetic nerve conducts electrical impulses
E electrical impulses are received at the sinoatrial node (SAN)
F as a result the atria contract
G the ventricle walls begin to contract from the apex (base) upwards
(D E C F B G A)
Rate:
5
Average: 5 (1 vote)