After studying this section you should be able to:

• describe the transport of oxygen in the blood and explain how oxygen is released at the tissues
• describe the transport of carbon dioxide
How is oxygen transported?
Oxygen is absorbed in the lungs from fresh air which has been breathed in. Red blood cells (erythrocytes) contain the rotein haemoglobin which can reversibly combine with oxygen. In the lungs, where the concentration of oxygen is high, haemoglobin will take up oxygen and form oxyhaemoglobin. In the tissues where the oxygen concentration is low, the oxyhaemoglobin will dissociate and release the oxygen. This is shown by the graph below which is called the oxygen dissociation curve. 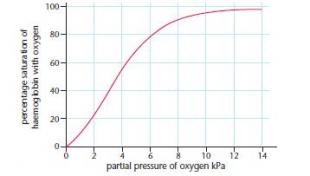 • The greater the amount of carbon dioxide at the tissues, the more the dissociation curve is moved to the right, and the  more oxygen is ‘off-loaded’ to the tissues. This is called the Bohr shift. The carbon dioxide lowers the affinity of the haemoglobin for oxygen.
• Fetal haemoglobin has a greater affinity for oxygen than adult haemoglobin.
This allows the fetus to take oxygen from the mother’s haemoglobin.
Myoglobin
There is another substance that can act as a respiratory pigment. This is myoglobin. It does not travel in the blood but is found in muscle. It has a greater affinity for oxygen than haemoglobin and so only releases oxygen at very low partial pressures. It acts as a store of oxygen trying to prevent anaerobic respiration from occurring.
This is done with the help of the red blood cells as follows:
• carbon dioxide diffuses into red blood cells from the tissues
• the carbon dioxide reacts with water to produce carbonic acid, this reaction being catalysed by the enzyme carbonic anhydrase in the cell (a very fast reaction!) 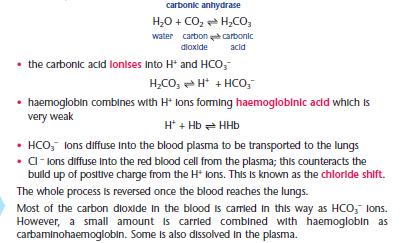 Myoglobin only has one polypeptide chain compared to four found in each molecule of haemoglobin. Myoglobin is often found in diving animals or animals that live in anaerobic mud, e.g. lugworms.
Do not confuse carbaminohaemoglobin with carboxyhaemoglobin which is formed when carbon monoxide combines with Hb.
Plasma
This is the fluid in which all of the blood contents are transported. Listed below are some substances transported in the plasma:
• water – dissolves substances such as glucose for transport, stores dissolved prothrombin and fibrinogen which may be used later in clotting
• proteins – some are used to buffer the pH of the blood
• glucose – on its way to releasing energy in respiration
• lipids – on their way to releasing energy in respiration
• amino acids – on their way to cells to help assemble proteins or release energy in respiration
• salts – contribute to the water potential of blood, so that cells are not dehydrated by osmosis
• hormones – chemical messenger-molecules on their way to a target organ
• antigens – recognition proteins preventing white blood cells from destroying the person’s own blood
• antibodies – made by lymphocytes to destroy antigens
• urea – made in the liver from excess amino acids, extracted by the kidneys.
Water has many important functions in the body, including being transported to the sweat glands to cool the
body down.

Note that the list outlines just some of the functions of plasmatransported substances. There are many more!