The Transport of Substances in a Plant
Quick revise

After studying this section you should be able to:

Root structure and functions
The roots of a green plant need to exchange substances with the soil environment.
The piliferous zone just behind a root tip has many root hairs which have a high surface area to volume ratio.
• Root hairs are used for absorption of water and mineral ions and the excretion of carbon dioxide.
• They have a cell membrane with a high surface area to volume ratio to efficiently absorb water, mineral ions and oxygen, and excrete carbon dioxide.
• They project out into the soil particles which are surrounded by soil water at high water potential compared with the low water potential of the contents of the root hairs.
• They have a cell membrane which is partially permeable to allow water absorption by osmosis .
• As they absorb more water by osmosis, the cell sap becomes more dilute compared with neighbouring cells. Water therefore moves to these adjacent cells which become more diluted themselves, so osmosis continues across the cortex.
• They have carrier proteins in the cell membranes to allow mineral ions to be absorbed by active transport.

Note that the root hairs also absorb oxygen from the air to aid aerobic respiration. The high surface area to volume ratio certainly helps!
Remember that water moves from a higher water potential to a more negative water potential.
Remember that active transport needs energy, so mitochondria will be close to the carrier molecules on the membranes
Passage of water into the vascular system
Once absorbed by osmosis, water needs to pass to the xylem vessels in order to

move up the plant. First it must move across the cortex of the root and through the endodermis before entering the xylem. The mechanism of passage is not known but there are three theories:

Water moves across the cortex and needs to pass through the endodermal cells before entering the xylem vessels of the vascular system. Each cell of the endodermis has a waterproof band around it, just like a ribbon around a box. This means that water must pass through the cell in some way, rather than around the outside. If water moves by the apoplast route up to this point, then it must now move into the symplast or vacuolar pathways.

Once the water has passed through the endodermis and navigated the pericycle then it must pass into the xylem for upward movement to the leaves and to the tissues. 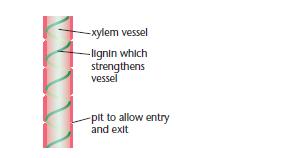 How does water move up the vascular system to the leaves?
Water moves into the xylem vessels in the vascular system in the centre of the root; it enters via bordered pits. The xylem is internally lined with lignin. This substance is waterproof and it also gives great strength to the xylem vessels, which are tube
shaped. Much of the strength of a plant comes from cells toughened by lignin. A Giant Redwood tree is many metres high but water is still able to reach all the cells. Water moves up the xylem for the following reasons.
• Root pressure gives an initial upward force to water in the xylem vessels. This can be shown by cutting off a shoot near soil level. Some sap will pour vertically out of the xylem of the remaining exposed xylem.
• Water moves up the xylem by capillarity which is the upward movement of a fluid in a narrow bore tube – xylem has very narrow vessels.
• Capillarity occurs because the water molecules have an attraction for each other (cohesion) so when one water molecule moves others move with it.
• Capillarity has another component – the fact that the water molecules are attracted to the sides of the vessels pulls the water upwards (adhesion).
• Transpiration causes a very negative water potential in the mesophyll of the leaves. Water in the xylem is of higher water potential and so moves up the xylem.
Xylem vessels die at the end of their maturation phase. The lignin produced inside the cells finally results in death. The young xylem cells end to end, finally produce a long tube-like structure (vessel) through which water passes. Xylem can still
transport water after the death of the plant.
Mineral ions are also transported in the xylem.
Translocation
This is an active process by which sugars and amino acids are transported through the phloem. Sugar is produced in the photosynthetic tissues and must be exported from these sources to areas of need, i.e. usually areas which have large energy requirements. These areas are called sinks, e.g. terminal buds and roots.
KEY POINT: Roots cannot photosynthesise so they need carbohydrates to be supplied by other parts of the plant such as the leaf or storage organs.
The sugars are transported in the phloem which consists of two types of cell, the sieve tube and companion cell. Unlike xylem, the cells of the phloem are living. 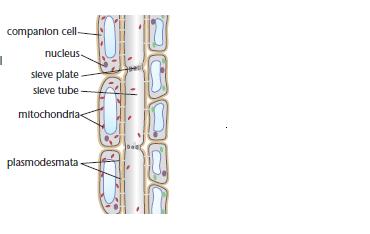 How is water lost from a leaf
Water moves up the xylem and into the mesophyll of a leaf. The process by which water is lost from any region of a plant is transpiration. Water can be lost from areas such as a stem, but most water is lost by evaporation through the stomata. Each stoma is a pore which can be open or closed and is bordered at either side by a guard cell. The diagrams show an open stoma and a closed stoma.

KEY POINT
Transpiration from a leaf takes place as follows:
• the air spaces in the mesophyll become saturated with water vapour (higher water potential)
• the air outside the leaf may be of lower humidity (more negative water potential)
• this causes water molecules to diffuse from the mesophyll of the leaf to the outside.
Some water can escape through the cell junctions and membranes. This is known as cuticular transpiration. In the dark all stomata are closed. Even so, there is still water loss by cuticular transpiration.
How do the guard cells open and close?
In the presence of light:
• K+ ions are actively transported into the guard cells from adjacent cells
• malate is produced from starch
• K+ ions and malate accumulate in the guard cells
• this causes an influx of water molecules
• the cell wall of each guard cell is thin in one part and thick in another
• the increase in hydrostatic pressure leads to the opening of the stomata.
Closing of the stomata is the reverse of this process. Under different conditions the stomata can be partially open. The rate of transpiration can increase in warm, dry conditions or decrease at the opposite extreme.

Measuring the rate of transpiration
This is done indirectly by using a potometer. This instrument works on the following principle: for every molecule of water lost by transpiration, one is taken up by the shoot.

The potometer is used as follows:
• a shoot is cut and the end is quickly put in water to prevent an air lock in the xylem
• the potometer is filled under water so that the capillary tube is full
• all air bubbles are removed from the water
• the shoot is put into the rubber seal
• the valve is changed to allow water uptake
• the amount of water taken up by the shoot per unit time is measured
• the shoot can be tested under various conditions.
Note that a living shoot may be photosynthesising whilst attached to the instrument. Only a minute amount of water would be used in this process. The instrument gives an accurate measure of transpiration.
Xerophytes
These are plants which have special adaptations to survive in drying, environmental conditions where many plants would become desiccated and die. The plants survive well because of a combination of the following features:
• thick cuticle to reduce evaporation
• reduced number of stomata
• smaller and fewer leaves to reduce surface area
• hairs on plant to reduce air turbulence
• protected stomata to prevent wind access
• aerodynamic shape to prevent full force of wind
• deep root network to absorb maximum water
• some store of water in modified structures, e.g. the stem of a cactus.
A cactus is a good example of a xerophyte. It makes excellent use of what little water there is available, and holds on to what it does manage to absorb really well. Its cuticle and epidermis are so thick that metabolic water released from the cells during night time respiration is retained for photosynthesis during the day. Nothing is wasted!