Processes of coastal erosion can operate in isolation but often work in combination along a coast.

Subaerial processes cause a great deal of cliff recession along some coasts, particularly in areas of soft, sedimentary rocks.

As a result mass movement processes, whether slow soil creep or more dramatic slumps and landslides, can cause rapid retreat of the coastline in combination with marine processes of erosion and transport. 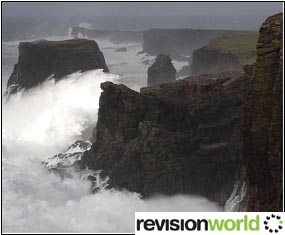 On most coasts, storm waves are able to pick up large quantities of beach material and hurl it at the cliffs. In this way, the process of abrasion (corrasion) becomes a powerful force which erodes mainly the lower part of the cliffs.

Where the geology is suitable, corrosion (solution) can be an effective erosive force. In areas of limestone or chalk rocks, the sea is often a milky colour where the rock material has become dissolved in the seawater. The salt in seawater is also capable of corroding some rock types.

Rates of erosion along the coast are determined by:

This video shows an explanation of the causes of coastal erosion and the development of coastal erosion landforms. The rate of coastal erosion varies due to factors such as the make up of the cliffs and the strength of the waves. Coastal erosion leads to the formation of cliffs, headlands, caves, arches, stacks and stumps. Erosion is a problem where homes are under threat, for example at Haisborough in Norfolk. Sea defences can be used to protect these areas.

A house threatened by coastal erosion

Video showing that when the coastline is soft and the sea is rough, severe coastal erosion occurs. A cliff-top resident describes the coastal erosion threatening his home and explains why he is demolishing his 100-year-old house. The resident describes how different wind, tide and weather patterns combine to affect the rates of erosion; he also explains how he is being forced to demolish his house through public liability responsibilities.