Migration is the movement of people from one place to another. People choose to migrate for a variety of reasons and migration can either be voluntary or forced.

Voluntary migration is when people choose to move for a better life.

Forced migration is when people have to move because the conditions they are living in are no longer safe.

Migration at local scale involves people moving from one area to another within the same region.

Migration at an international scale is when people move from one country to another.

The cause of migration and its consequences 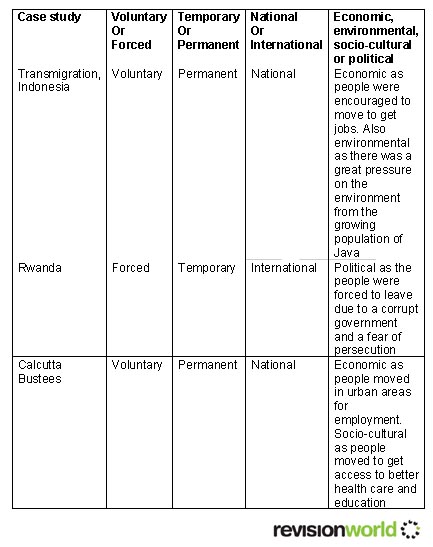 This video shows that seventy-five percent of India's population lives in rural poverty, which results in a stagnated economy and drives people to move to the city. Farming depends on the monsoon rains. A typical farmer feeds and clothes a family of four on $2 per day. Some families keep silk worms as a means of earning extra income but the yield is unreliable and poverty drives many farmers to suicide. Typical villages lack basic services, communications and infrastructure, resulting in a stagnated rural economy which is driving many families to move to cities.

Migration has impacts on the source and host countries, as well as the migrants themselves.

In a positive light, migration can lead to a better quality of life for migrants.

They may have a better job, larger homes and better access to services.

However, they may also become victims of racial discrimination or be forced to live in squalid conditions.