Newton's Laws of Motion can be used to work out forces and accelerations of bodies.

When solving problems you should always draw a diagram. Mark on all of the forces and accelerations.

A body of mass 5kg lies on a smooth horizontal table. It is connected by a light inextensible string, which passes over a smooth pulley at the edge of the table, to another body of mass 3kg which is hanging freely. The system is released from rest. Find the tension in the string and the acceleration. 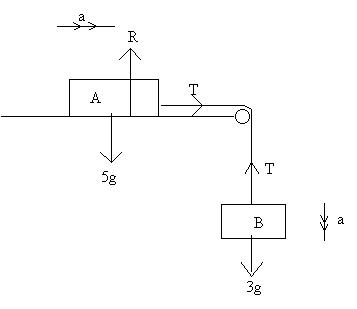