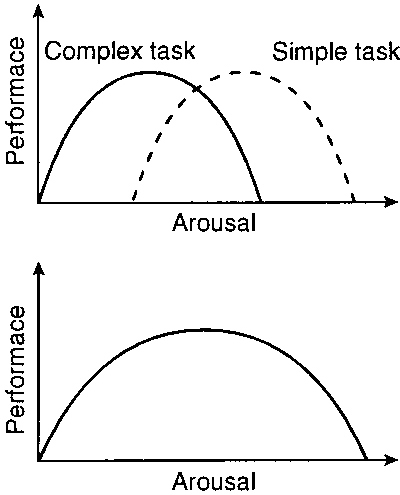 At low levels of arousal, performance will be below par, the athlete is not psyched up.

As arousal increases so does performance, up to an optimal point. After this point, further increases in arousal lead to declines in performance.

Each athlete has their own optimal level of arousal. Optimal arousal is higher for more simple tasks and lower for more complex tasks.

An increase in arousal causes improvement in performance up to an optimal point (moderate arousal level). After this point, increased arousal leads to deteriorated performance.

This theory accounts for some of the criticisms of the drive theory and this inverted ‘U’ relationship exists in a number of different circumstances:

Personality – personality types who enjoy high levels of excitement & are generally more extrovert can cope in a high-arousal situation. People who are more introverted are general more likely to perform well under low-arousal conditions.

Problems with inverted 'U' Theory