Boiling is the cooking of food by heating it in a pan of boiling liquid (usually water).

The most common foods that are cooked by boiling include: potatoes, vegetables, rice, pasta and tougher cuts of meat.

It can be a harsh method of cooking that should not be used on delicate foods as it can break them up. If food is over boiled such as pasta it will end up too soft.

Boiling is genuinely a healthy way to cook food, as no fat is added in the cooking process. However if you over boil vegetables you can lose flavour, colour and water soluble vitamins.

Boiled food is often less tasty as foods cooked using other methods such as roasting.

If food is boiled in a small quantity of water with a lid covering it, less energy will be used than in other methods such as simmering or roasting.

Simmering works in a very similar way to boiling, but it is more gentle on the food as the water temperate is below the boiling point. As such more nutrients are protected.

Soups and curries are cooked using the simmering method.

In steaming heat is transferred by conduction from the pan to the liquid and then through the food and also by convection through steam.

The most common foods cooked using steam include: rice, fish and vegetables.

Steaming is a very healthy way of cooking as like with boiling no fat is added in the cooking process.

As there is no contact with the water vegetables will keep more of their taste, colour and nutrients, then if they had been boiled.

Steamed food may still lack the flavour of roasted or fried food.

As steaming is a delicate cooking method it is good for fish but not for tough meats. 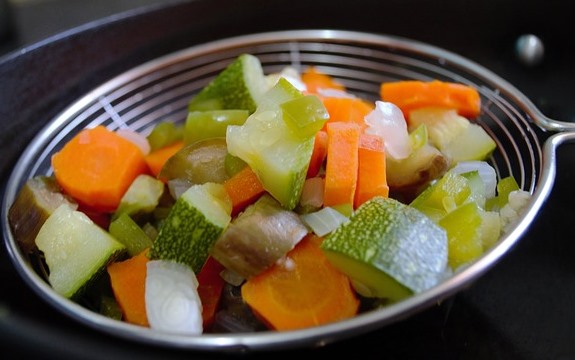 Blanching involves cooking food for only a very short period of time in boiling water then moving the food quickly into cold (or sometimes iced) water.

By placing the food into cold water you stop the cooking process so will preserve more colour, texture and vitamins.

Blanching can be used to soften harsh flavours in food. Raw onions for example can be blanched to give them a milder taste.

Blanching can be used to prepare fruit and vegetables for freezing.

Poaching involves cooking food in a pan of liquid below boiling point, usually around 80⁰C.

The most common foods poached include: eggs, fish and fruit.

Poaching will keep the food tender as it is a gentle way to cook.

Like with boiling, nutrients and flavours are transferred to the liquid, lowering the nutritional content and tastiness of food.

If however the food is cooked in a flavoursome sauce, such as fish poached in white sauce the food will absorb the flavours. 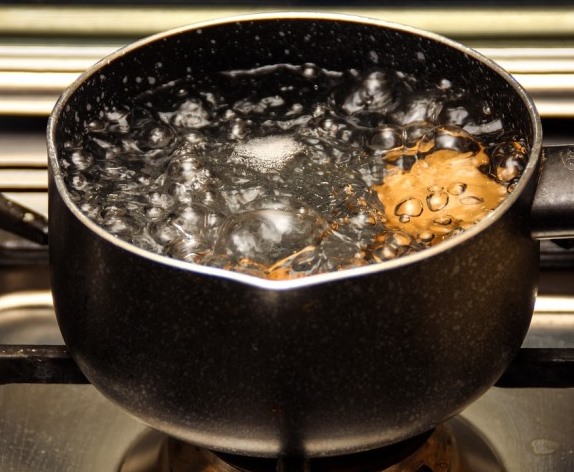 Braising involves slowly cooking food in an oven proof pot with its lid on. The pot contains liquid usually water, stock or wine and often herbs and vegetables.

The food is cooked in the covered pot by a mixture of steaming and simmering.

Braising is best used for cooking tougher joints of meat as it helps to tenderise it.

Before braising the meat is usually lightly fried to brown it and seal it to keep the juices inside.

The flavours from liquid and any herbs or vegetables in the pot are absorbed by the joint.