An earthquake is the shaking and vibration of the crust due to plate tectonics (movement of plates).

Earthquakes can happen along any type of plate boundary. They also occur along faults which are large cracks in the earth’s crust. Most faults are associated with large plate boundaries where violent earthquakes usually occur. 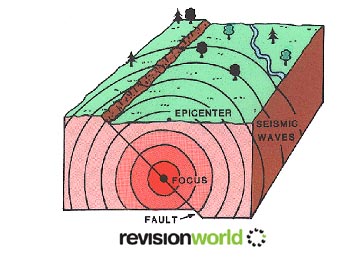 An earthquake starts deep below the earth’s surface at the focus. The focus is the point inside the Earth's crust where the pressure is released.

The epicentre of an earthquake is the position on the earth’s surface directly above its focus.

The jerking movement caused by plates sticking then moving releases built-up pressure inside the Earth's crust, in the form of seismic waves. The waves spread out from the focus.

The strongest waves are found near the centre of the earthquake. This means that the most severe damage caused by an earthquake will happen close to the epicentre.

If the focus is very deep or the shockwaves have to travel through dense rock, the effect will be less

The following video shows how a Tsunamis works, which are often caused by Earthquakes.