Tectonic plates are sections of the Earth's solid crust that “float” on top of the mantle. The mantle contains hot molten rock (magma) heated by energy from the earth's core

The earth’s crust is made up of seven main tectonic plates and numerous smaller plates. 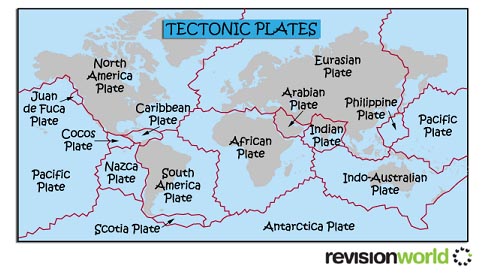 There are two main types of tectonic plate.

The plates fit together like pieces of a large jigsaw. Tectonic plates meet along four main types of plate boundaries.

The tectonic plates are in constant motion travelling at a few centimetres per year. The ocean floors are continually moving, spreading from the centre and sinking at the edges.

Where plates meet, huge forces build up causing earthquakes and volcanoes and the formation of fold mountains and deep-sea trenches.

This short video provide an introduction into Plate Tectonics and charts some of the historic movement of plates.

When two tectonic plates slide past each other without creating or destroying any land they form a conservative plate boundary.

The plates often get stuck as they try to move past each other due to friction. Over time this builds up great pressure until finally they jolt past each other. The sudden movement causes an earthquake which may be violent and cause great damage. 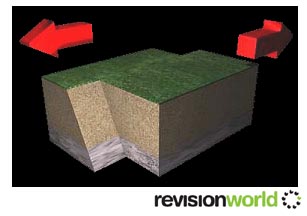 When two plates move away from each other creating a gap between them. Molten rock (magma) rises from the mantle to fill the gap forming a mid-ocean ridge 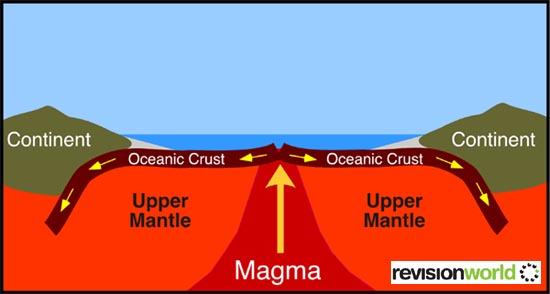 Volcanoes can form along the edges of the plate boundary due to the rising magma. These volcanoes are called shield volcanoes.

Example: the North American plate moving away from the Eurasian plate formed the Mid-Atlantic Ridge and created Iceland through volcanic activity.