The Great Depression and Germany

Stresemann’s death could not have come at a worse time for the young republic. The onset of the Great Depression was to have dramatic effects on Germany

The German economy’s recovery after the inflation of 1923 had been financed by loans from the United States. Many of these short term loans had been used to finance capital projects such as road building. State governments financed their activities with the help of these loans.

German interest rates were high, and capital flowed in. Large firms borrowed money and depended heavily on American loans. German banks took out American loans to invest in German businesses. The German economic recovery was based on shaky foundations.

The German economy was in decline prior to the Wall Street Crash. There was no growth in German industrial production in 1928-9 and unemployment rose to two and a half million.

On the 24th October, “Black Thursday”, there was panic selling on the New York Stock Exchange reacting to a business crisis in America. Early the following week, “Black Tuesday”, 29th of October, panic selling set in again. 16.4 million shares were sold, a record not surpassed for forty years. Share prices went into freefall. Ten billion dollars was wiped off the value of share prices in one day.

As a result American demand for imports collapsed. American banks saw their losses mount and they started calling in their short term loans with which so much of German economy had been financing itself for the past five years.

Firms began to cut back drastically. Industrial production fell quickly and by 1932 it was 40% of its 1929 level. To make matters worse in 1931 a number of Austrian and German banks went out of business. . Unemployment rose from 1.6 million in October 1929 to 6.12 million in February 1932. 33% percent of the workforce were now unemployed.

By 1932 roughly one worker in three was registered as unemployed with rates even higher in industrial areas of Germany. Matters were made worse by the fact that the drastic fall in people’s income caused a collapse in tax revenues. Many soon were not in receipt of unemployment benefits as state governments could not afford to pay it.

It was in this economic chaos that the Nazis and Communists thrived.

Crime and suicide rates rose sharply and many lost hope. People deserted the democratic parties in droves and turned to either the Communists or the Nazis. In the election of 1930, the Nazis made their electoral breakthrough winning 107 deputies while the Communists won 77. Both parties were opposed to the democratic system and used violence against their political opponents. Hitler’s Brownshirts clashed frequently on the streets with their Communist enemies.

The new chancellor, the Centre politician Heinrich Bruning, followed a policy of economic austerity where government spending was cut in order to keep inflation under control and keep German exports competitive. He increased taxes, reduced salaries and reduced unemployment assistance.

While it was sound economic thinking at the time, it only worsened the situation. The banking collapse in 1931 made matters even worse. Bruning was so unpopular that when he travelled by train he had to keep the blinds down as when people caught sight of him, they threw rocks! He was nicknamed the “hunger chancellor”.

The end of Parliamentary democracy

Given the unpopularity of Bruning’s policies, he found it very difficult to get a majority in the Reichstag. He relied on Article 48 and the emergency powers of the president to get laws passed. By 1932, parliament was being largely ignored.

Some of the advisors to the President including General Kurt von Schleicher wanted to include the Nazis in government which Bruning opposed. They wanted to bypass the Reichstag completely and bring in a right wing authoritarian government.

Hindenburg lost confidence in Bruning and they quarrelled about land reform. Bruning was replaced as chancellor by the equally unpopular von Papen. His cabinet of barons had absolutely no support and this was shown in the election of July 1932.

A disaster for Democracy

The result was a disaster for democracy in Weimar Germany. The Nazis received 37% of the vote and 230 seats while their communist enemies got 89 seats. A majority of Germans had voted for non-democratic parties. Political violence intensified with twelve people killed on the day of the polls.

The election of November 1932 saw a decline in Nazi but they still remained the largest party in the Reichstag. Communist support continued to rise and this worried many industrialists. Von Papen was replaced as chancellor by von Schleicher.

Von Papen immediately began to plot against von Schleicher and met Hitler. They agreed that Hitler would become the chancellor of a government made up mainly of von Papen’s supporters. Hindenburg who disliked Hitler, was persuaded to appoint him chancellor on the 30th of January. The Weimar Republic was dead!

Summary of the events leading to the rise of the Nazis: 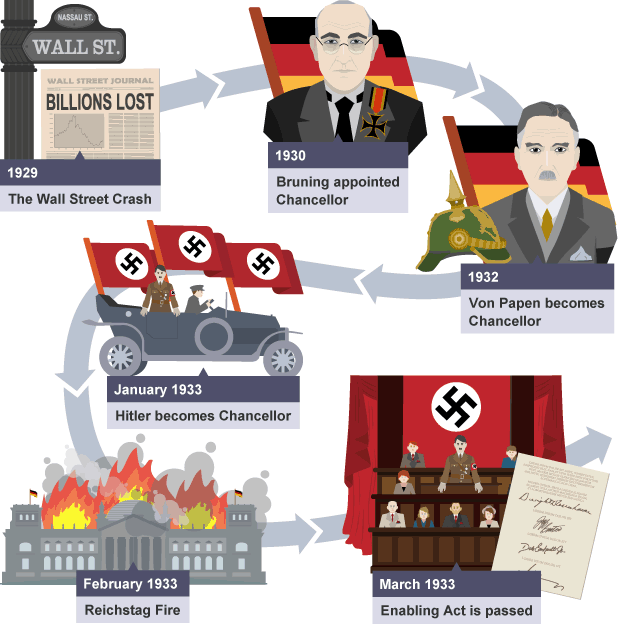