An operating system is a set of programs that controls how the hardware of a computer works.

An operating system provides a means of communication between the user and the computer, deals with the loading and running of applications programs and manages the transfer of data and files to and from peripheral devices.

The operating system that a computer has also determines what applications software will run on it. 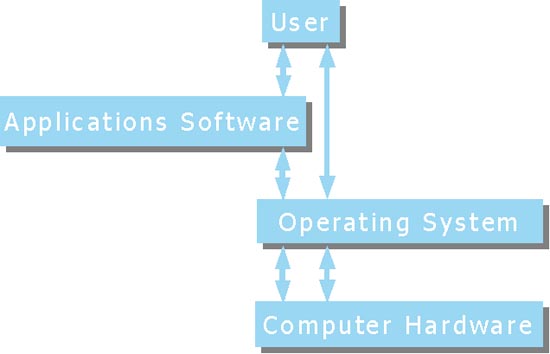 Functions of an operating system

It deals with input and output, which involves:

It manages the transfer of data between the computer’s memory and backing storage devices.

It manages system resources, which involves:

It deals with the loading of applications software into memory and controls the execution, or ‘running’ of them.

It also provides a way for applications software to communicate with the computer’s hardware.

It deals with any errors that occur when a program is being run, or when data is being transferred somewhere, and informs the user if necessary.

It manages system security, which involves:

It provides a human computer interface, or HCI, for the user.

It provides special facilities for multiprogramming.

A multiprogramming operating system can hold more than one program in memory at the same time.

There are two types of multiprogramming operating system;

A multitasking operating system allows two or more programs to run at the same time.

The operating system does this by switching rapidly between the terminals giving each one in turn a small amount of processor time on the central computer.

The operating system switches so quickly between the terminals that each user appears to have uninterrupted access to the central computer.

However if there are a large number of users on such a system the time that it takes the central computer to respond can become more noticeable.

Utility programs are usually supplied along with an operating system.

They are used to carry out routine tasks that are often needed by a user such as:

A processing method is the way that a particular operating system deals with input.

There are three main types of processing method:

Real-time processing systems process input data so quickly that the resulting output can affect further input.It is used for applications where it is essential that the computer responds straight away to input.

Examples of applications where real-time processing is used are;

Transaction, or on-line, processing, is used for applications where input needs to be dealt with straight away but it is not critical if there is a slight delay in the time that it takes for the computer to respond to requests.

Examples of applications where transaction processing is used include the on-line seat booking systems used by airlines and the stock control systems used by catalogue companies like Argos.

A system where transaction processing is used will always give an up-to-the-minute picture of the current situation.

A batch processing system does not respond to input straight away. Instead, input is collected together into a ‘batch’ while the system is off-line.

When a batch is ready to be processed the system goes on-line to carry out the processing of the data.

Batch processing is non-interactive. This means that the user cannot get an immediate response to input as they would with an interactive system.

Examples of applications that use batch processing include producing gas, electricity or water bills and marking OMR sheets from multiple choice examinations.