A spreadsheet package is a general purpose computer package that is designed to perform calculations.

A spreadsheet is a table which is divided into rows and columns.

This video looks at spreadsheets 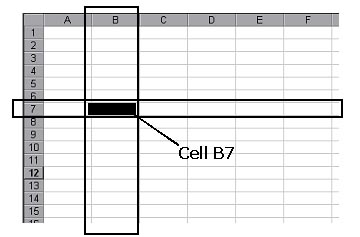 A formula is used on a spreadsheet to perform a calculation using the numbers in other cells. The result of the calculation is displayed in the cell where the formula has been entered. A simple formula can be used to add, subtract, multiply or divide numbers.

To carry out these sorts of calculation these symbols are used in a formula:

Suppose you wanted to add two numbers on a spreadsheet together. If the numbers were in cells A1 and A2 the formula that you would need to enter would be something like = A1+A2

Two of the most commonly used functions are used to calculate either the SUM or AVERAGE of a range of cells.

This formula would add up all of the numbers in cells A1 to A10.

Instead of typing in such a long formula, the SUM function could be used.

On most spreadsheets the formula would be something like : = SUM (A1: A10)

Similarly, to work out the average of the numbers in cells A1 to A10, the AVERAGE function could be used.

On most spreadsheets the formula would be something like: = AVERAGE (A1: A10)

Exactly what you need to type in will depend upon the spreadsheet package that you are using. If a number of cells need the same formula it can be copied and pasted in the same way as text.

Spreadsheet packages have built-in formatting options which allow you to change the way a spreadsheet looks.

Anything that affects the appearance of a cell is called a cell format.

Some of the more commonly used cell formatting options are:-

Anything that affects the appearance of numbers in a cell is called a data format.

Some of the more commonly used cell formatting options are:-

One very useful feature of spreadsheet package is the sort facility. This allows the columns or rows of a spreadsheet to be sorted into alphabetical or numerical order of a value in a particular row or column. 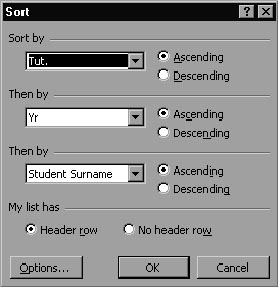 Most spreadsheet packages include facilities for representing information in the form of a graph or chart.

The more common types of charts and graphs that are used are bar charts, pie charts and line graphs.

A chart wizard gives step-by-step help when drawing a graph or chart.

The first step in creating a graph or chart is to enter the data on the spreadsheet. 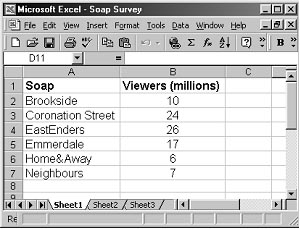 The next step is to choose the type of chart or graph. A chart wizard can be used to help with this. 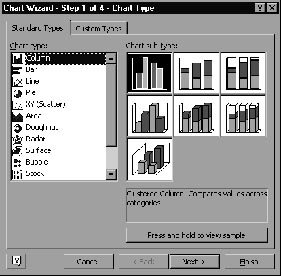 The graph is automatically drawn by the spreadsheet software. It can then be copied and pasted into other applications if required.