Infrared radiation is used in remote controls for televisions and other electronic appliances such as DVD and video recorders. Looking with a digital camera (which shows up infrared signals that our eyes cannot see) you can see the flashing infrared-emitting diode sending the signal. These signals cannot pass through solid objects but can reflect off walls and ceilings to operate the television.

This video looks at Infrared Radiation and visible light

Infrared radiation and light travel along glass optical fibres by being totally internally reflected. The fibres are made with a core that refracts differently from that of the outer rim. The signal is reflected at the boundary as shown below 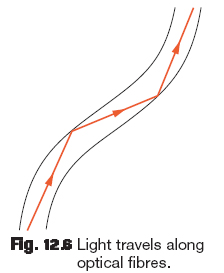 Signals (pulses of radiation) can be sent for long distances using optical fibres. A stream of data can be transmitted very quickly. There is less interference than with microwaves passing through the atmosphere. It is also possible to use multiplexing, a way of sending many different signals down one fibre at the same time. Digital signals are used so that noise can be removed when the signal is regenerated.

This video explains the use of Optical Fibres

Lasers produce a beam of radiation in which all the waves have the same frequency and are in phase (in step) with each other. Both infrared radiation and red light lasers are used as sources for fibre optic communications.

They are also used in a CD player. Compact discs (CDs) store information digitally as a series of pits and bumps on its shiny surface.

A laser beam is reflected differently from the pits and bumps and a detector is used to ‘read’ the different reflections as 0s and 1s – the information stored on the CD. 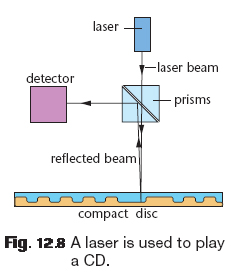 Iris scanning is increasingly being used to identify people when high security is needed. The iris is so individual that the chance of mistaken identity is almost zero. A digital camera is used to take a clear high-contrast picture of the iris using both infrared radiation and light. A computer is used to locate the pupil (which appears very black in infrared illumination). The patterns in the iris are translated into a code. Two hundred points are compared in the iris (only 60 or 70 are used when matching fingerprints). The computer looks for features such as rings and freckles. The process takes about 5 seconds. The iris does not change much over a lifetime, and the technique works even when people wear contact lenses.