Gamma rays, X-rays and high energy ultraviolet radiation are high energy radiations which can ionise atoms they hit. Atoms are ionised when electrons are removed and this makes them charged and more likely to take part in chemical reactions.

If these atoms are ones inside cells of the body, ionising radiation can damage or kill them. If the DNA in a cell is damaged it may mutate. This can cause cells to grow out of control which means they have become cancer cells.

This video explains about Gamma radiation

Some materials are radioactive. This means they randomly emit ionising radiation from the nucleus of unstable atoms. There are three types:

There are two types of danger from all these radioactive materials:

A short period of irradiation is not as dangerous as being contaminated because, once contaminated, a person is continually being
irradiated.

X-rays have high energy and can pass through the body tissues. They are stopped by denser materials such as the bones and by pieces of metal. They can be used to scan the body and show breaks in the bones. The diagram shows how a photographic plate can be placed behind the patient and X-rays directed towards the patient. The plate will darken where the X-rays strike it and leave white shadows of the bones, where the X-rays are absorbed. 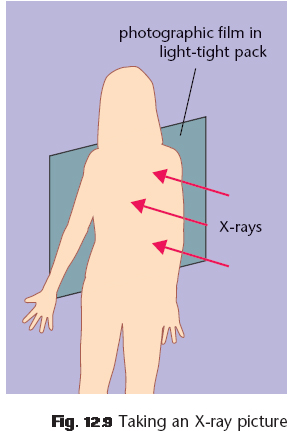 The operator stands behind a lead screen so that he or she is not exposed to X-rays each time a patient is X-rayed.

The patient should not receive too many X-rays. They are used when the benefit (for example, finding a broken bone) is greater than the risk.

In the 1950s, all pregnant women were X-rayed to check on the development and position of the baby. This caused a few cancers among children. The benefits were not greater than the risks and routine X-rays were stopped.

X-rays are used for security scans of passengers’ luggage. They pass through the suitcase and clothes, but metal items and batteries stop the X-rays. Taking an X-ray picture show up as shadows on the screen.

The video below shows how X-Rays work

They are used to image the body. The figure shows X-rays directed towards the patient with a photographic plate placed behind. The plate darkens where the X-rays strike it and there are white shadows where the bones absorbed the X-rays.

There are benefits to using ionising radiation but these must be weighed against the risks. To protect people dense materials, like lead screens and concrete, are used to absorb the radiation and act as barriers. Radiation workers, like radiographers and workers at nuclear power stations, are monitored to make sure they are not exposed to high levels of radiation. They wear protective clothes.

A patient should not receive too many X-rays. They are used when the benefit (for example, finding a broken bone) is greater than the risk. In the 1950s all pregnant women were X-rayed to check on the development and position of the baby. This caused a few cancers among children. The benefits were not greater than the risks and routine X-rays were stopped.

Radiation workers do not benefit from a dose of radiation and would be at risk from high exposure every day. Radiographers leave the room, or wear a lead apron, when a patient is X-rayed. People tend to overestimate the risks from unfamiliar things compared to familiar things (for example they may think flying is more risky than cycling.) Because ionising radiation can’t be seen, people tend to think it is more dangerous than it is.

Unfortunately, using CFC gases in aerosol cans (as a propellant to force the contents of the can out of the nozzle) and as a refrigerant in refrigerators and freezers, caused CFC gas to increase in the atmosphere. This pollution reacted with the ozone and reduced the amount in the ozone layer.

Above the Antarctic an ‘ozone hole’ developed and began to grow.

International agreements have stopped the use of CFCs but the ozone layer will take time to recover. Where the ozone layer has been depleted, living organisms, especially animals, suffer more harmful effects from ultraviolet radiation.

The lower-energy ultraviolet radiation that passes through the ozone layer can cause skin cancer and damage the lens of the eye. The number of cases of skin cancer rose when people started to spend more time in the sun. Light skins are more easily damaged than dark skins. Dark skins absorb more of the ultraviolet radiation close to the surface; light skins allow the radiation to penetrate further into the body tissues.

Campaigns warn people to stay out of the sun during the hottest part of the day, and to cover up with a hat and clothes. They should also use a highprotection factor sunscreen, which reduces the ultraviolet radiation reaching the skin.

This video explains about Ultraviolet light

The lower energy ultraviolet radiation that reaches the Earth’s surface can cause:

The number of cases of skin cancer has increased in recent years as people spend more time in the sun. Dark skins absorb more ultraviolet radiation than light skins, which are more easily damaged.

Ultraviolet radiation is used to detect forged bank notes. Bank notes have some features, for example the number of pounds, that fluoresce in ultraviolet radiation. This means they absorb the ultraviolet and re-emit visible light. You may have seen a detector in shops. The banknotes are placed under the light and the number shows up brightly, because it flouresces if the bank note is genuine.