Electromagnetic radiation is used for communications and transmission of information. The waves that are used in this way are radio waves, microwaves, infrared radiation and light.

The idea of using a signal lamp to communicate was used in the 19th century. This method of long distance communication needed a code. One code used was Morse code, a series of long and short flashes of light for different letters of the alphabet. These signals can only be seen when visibility is good and for short distances.

Today we still use codes to send signals using electromagnetic radiation. There are two types of signal, analogue and digital. An analogue signal changes in frequency and amplitude all the time in a way that matches the changes in the voice or music being transmitted. A digital signal has just two values – which we can represent as 0 and 1.

An analogue signal varies in frequency and amplitude. A digital signal has two values, 0 and 1 (or ‘on’ and ‘off’). 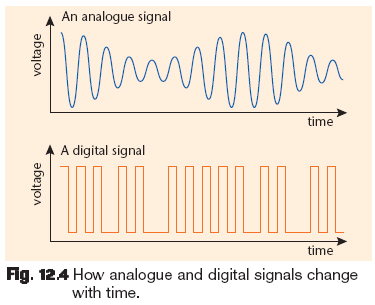 The signal (voice, music or data) is converted into a code using only the values 0 and 1. The signal becomes a stream of 0 and 1 values. These pulses are added to the electromagnetic wave and transmitted. The signal is received and then decoded to recover the original signal.

Both analogue and digital signals can pick up unwanted signals that distort the original signal.

These unwanted signals are called noise. Digital signals can be cleaned up in a process known as regeneration because each pulse must be a 0 or a 1, so other values can be removed. Analogue signals can be amplified, but the noise is amplified too. This is why digital signals give a better-quality reception.