Forces and their effects
Quick revise

Mass is measured in kilograms. An object has the same mass on the Earth, on the Moon, or far out in deep space. Weight is a force and is measured in newtons. Weight is due to gravity attracting the mass towards the centre of the Earth. In deep space there is no gravity and the mass has no weight. On the Moon, which has less mass than the Earth, the gravitational attraction is less, so objects will have less weight than they have on the Earth (only one sixth).

Gravitational field strength close to the surface of the Earth is assumed to be a constant 10 N/kg.

This video explains the effects of Gravity

A resultant force is needed to change the velocity of an object. If the forces on an object are balanced then it will remain stationary, or, if it is moving, it will continue to move at a steady speed in the same direction. This seems strange because we are used to frictional forces slowing things down.

Remember: If the resultant force on an object is zero, the object will remain stationary or continue to move at a steady speed in the same direction.

This video explains about resultant forces and Terminal Velocity

Resistance to motion – friction and drag
When one object slides over another there is friction, a resistive force between the two surfaces. This arises because, on a microscopic scale, the surfaces are not completely smooth and the high points become stuck together.

Air resistance (or drag), is a resistive force that acts against objects that are moving through the air. Drag acts on objects moving through any fluid (gas or liquid) – and is larger in liquids.

This video explains about the effects of air resistance

The video below shows how balanced and unbalanced forces effect motion 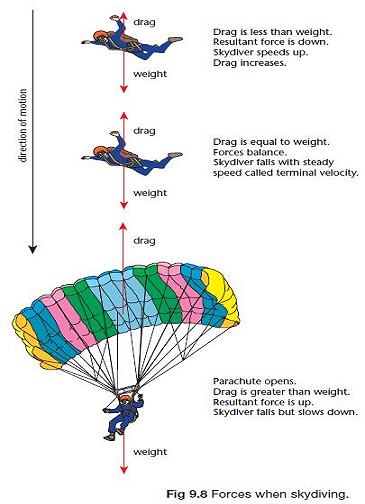 This video explains how forces effect a skydiver 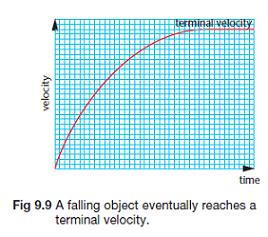 When two objects interact, there is always an interaction pair of forces. In  Fig. 9.10, skater A cannot push skater B without skater B pushing skater A.

In an interaction pair of forces, the two forces:

Remember: When two objects interact, the forces they exert on each other are equal and opposite and are called action and reaction forces.

When you walk, your foot pushes back on the ground and the ground  pushes forward on your foot.

Imagine walking, or  cycling, on a  frictionless icy  surface. You would  slip back and never  move forward.
Descriptions of what  is pushing/pulling on  what are important  in OCR A.

A resultant force on an object causes it to accelerate. The acceleration:

Remember: For a resultant force on an object with mass m: