The video and text below anslyse the poem Follower by Seamus Heaney. 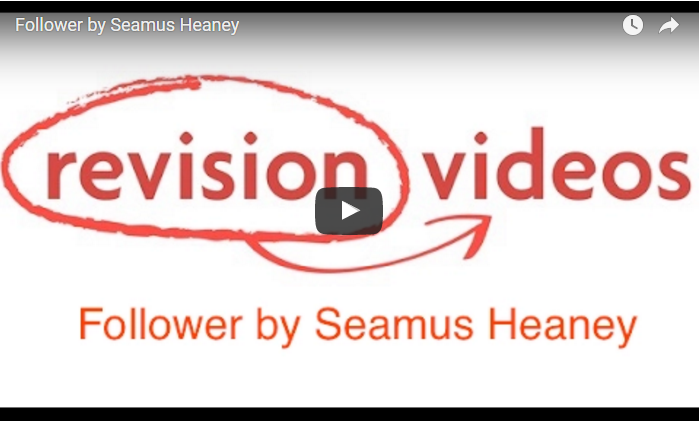 This poem examines Heaney’s relationship with his father and the effects of ageing.

The skilled nature of his father (also examined in Digging) is shown in the opening stanza where his power as a farmer is described.

The simile ‘his shoulders like a full sail strung between the shafts and the furrow’ emphasises how powerful and vast he appeared to Heaney as a child.

He also controlled the horses merely by clicking his tongue, showing how skilled he is.

The second stanza puts it very simply: ‘an expert’ in the first two words, a sentence on its own to emphasise how important this is.

His qualities are further emphasised when he tells us ‘the sod rolled over without breaking’ to show his expertise.

In the third stanza Heaney describes how he gets the horses as a ‘team’ to move effortlessly and turn round whilst he uses his skills to map ‘the furrow exactly’. Heaney, by comparison is clumsy and ‘fell sometimes on the polished sod’. He lacks the control and power of his father who carries him ‘on his back’ effortlessly.

The fifth stanza shows how much he admired his father as ‘I wanted to grow up and plough’ and to do the things his father so skilfully did. However he seems sad that all he did was get in his father’s way and followed him around.

His father has a ‘broad shadow’ to show his size compared to Heaney and the fact that Heaney lived his life in his father’s shadow.

The final stanza emphasises how Heaney saw himself as a ‘nuisance, tripping, falling, yapping always’ but this is followed by a change as we move back to the present to discover it is Heaney’s father who is a nuisance to him, ‘stumbling behind me’, a reminder that we all grow old, sadly.

The final words ‘and will not go away’ seem harsh, as if Heaney finds his father an irritant, yet his father put up with him when he was a young boy, getting in the way. It almost seems selfish, but possibly shows how people do find caring for their elderly relatives a difficult thing to do.