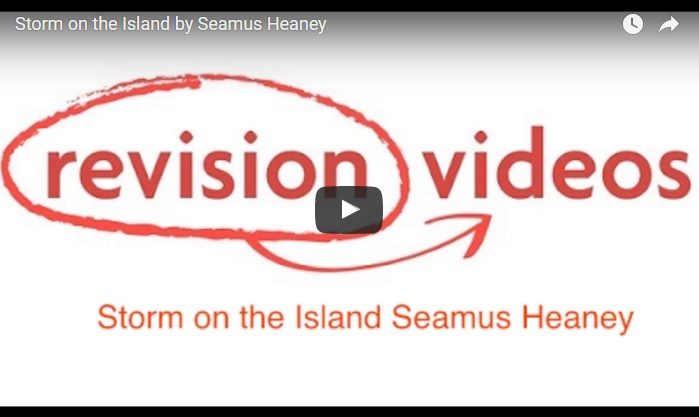 The poem highlights the violence of nature, as experienced by Heaney.

There is a great deal of vivid description and use of sounds to create a sense of a violent storm throughout the poem.

The people of the island expect the storm and ‘are prepared’ by building their houses low down in height so they are not blown over. The houses are also built in a sturdy manner, with walls sunk ‘in rock’ so they stand up to the power of the wind and rain.

There is personification of the earth on line 3 ‘the wizened earth’ to show the earth is also intelligent enough to know that hay will not grow or be able to stand up to the power of the wind, so it is not to be seen on the island. The idea of it becoming wizened indicates that maybe hay tried to grow, but this was soon put to an end by the brutality of the elements.

Trees are also absent, emphasising how powerful the winds must be. The image of the island is now of a very drab, barren landscape, with little growing, almost like a desert. The absence of trees gives a sense of a loss of ‘company’ (line 6) during the storms. This seems to be because the wind will cause the trees to make a lot of noise, which at least identifies the power of the storm. Here there is no sound, so the storm appears more eerie and unpleasant, as a result.

The trees are personified in terms of the noise they could make ‘raise a tragic chorus in a gale’ like a bad choir singing, warning of unhappy or unpleasant events. This could reflect the unhappiness of the people on the island as the storm rages around them.

The tone is almost conversational ‘you know what I mean’ as if Heaney is talking to the reader, almost confiding in them.

The animal imagery ‘spits like a tame cat turned savage’ shows it is unpleasant and uncontrollable. The image also indicates that the sea can be calm and ‘tame’ but now has taken on a rough, ‘savage’ appearance.

All the people, living on the island ‘sit tight’ waiting for the storm to end and ‘while wind dives’ uses alliteration on the ‘w’ sound to emphasise the harsh qualities of the wind still further.

There is war or weaponry imagery with ‘space as a salvo’ and ‘we are bombarded by the empty air’ as if they are being attacked by an invisible army with invisible bullets.

The final thought is how strange it is that what we fear is a ‘huge nothing’; the storm is invisible, yet it causes so much fear in us. Is this a reference to God as well? This is something that is feared by so many, is powerful, can cause so much harm and makes so many scared. Heaney was an Irish poet and the theme of the power of religion is very prominent in many of his poems as is the power of nature.